Gifts are nice. At their best, they’re a thoughtful token of esteem or affection.

But sometimes the best kind of gift you can give someone is an experience.

My husband gave me a unique experience recently that I wanted to share, in part because it directly pertains to the book series I’m working on. And in part because…well…it’s straight-up awesome.

I visited hubby’s office last week to take him to lunch, and he first took me on a detour into the studio to see the new “toy” his company has been working on for NASA. This, ladies and gentlemen, is called a Pufferfish. A touch-responsive spherical display. 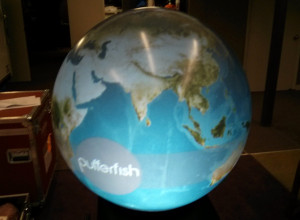 The image you see here is a projected compilation of satellite imagery.

Not only was it an accurate representation of the Earth set in a glass globe too large for me to put my arms around, it was also rotating on its axis and responsive to me “tilting” the projection with a flick of my finger. For a moment in that darkened studio, I felt like cosmic giant. My sci-fi obsessed inner child may have squealed. A lot.

But that wasn’t the coolest part.

Earth isn’t the only celestial body that’s been thoroughly mapped, after all. When I casually mentioned to my husband how neat it would be if I could see Mars in the same “light”, he disappeared for a few minutes and then convinced the magic ball to give me THIS: 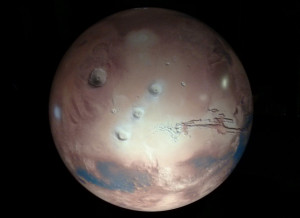 I have to admit, I got a little choked up.

I’ve been studying flat maps of Mars for several years now as part of my research for the sci-fi series I’m writing. It has about 1/3rd the gravitational pull of Earth, but a huge percentage of my personal affection. Seeing the whole of the red planet up close…

Let’s just say, to me, the experience was about a thousand times better than a bouquet of flowers. ^_^ 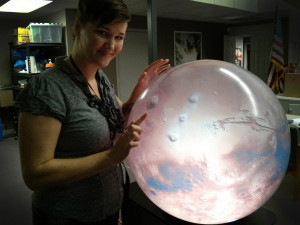 To give a better feel for scale, here’s me pointing out the more precise location where the first book in the series is set. That’s Olympus Mons, in an area called the Tharsis region.

Seeing Mars in all of it’s 3-dimensional glory was inspiring. To turn and tilt and get an almost literal “feel” for the geography of another planet was certainly one of the more memorable experiences I’ve been given as of late. It brought me closer to my story.

Maybe a little too close. 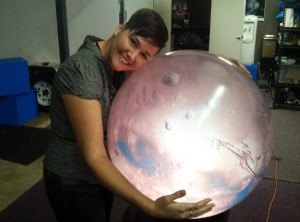 And here I am, hugging a planet.

I couldn’t resist the opportunity.
(My apologies to whoever had to Windex away all evidence of me afterward.)

Oh, and kudos to my dear, wise husband for not doing THIS to me: 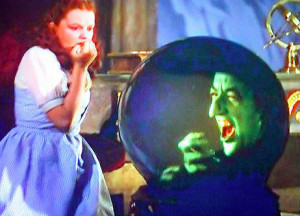