In early celebration of the release of C.J. Redwine’s latest fairytale retelling, I am delighted to be giving away a SIGNED ARC of The Wish Granter. 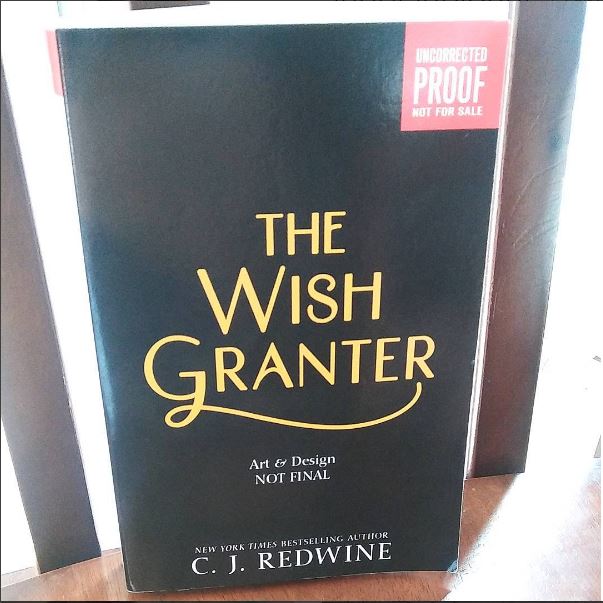 The world has turned upside down for Thad and Ari Glavan, the bastard twins of Súndraille’s king. Their mother was murdered. The royal family died mysteriously. And now Thad sits on the throne of a kingdom whose streets are suddenly overrun with violence he can’t stop.

Growing up ignored by the nobility, Ari never wanted to be a proper princess. And when Thad suddenly starts training Ari to take his place, she realizes that her brother’s ascension to the throne wasn’t fate. It was the work of a Wish Granter named Alistair Teague who tricked Thad into wishing away both the safety of his people and his soul in exchange for the crown.

So Ari recruits the help of Thad’s enigmatic new weapons master, Sebastian Vaughn, to teach her how to fight Teague. With secret ties to Teague’s criminal empire, Sebastian might just hold the key to discovering Alistair’s weaknesses, saving Ari’s brother—and herself.

But Teague is ruthless and more than ready to destroy anyone who dares stand in his way—and now he has his sights set on the princess. And if Ari can’t outwit him, she’ll lose Sebastian, her brother…and her soul.

An uncommon fairytale retelling, with an equally uncommon heroine—ideal for fans of Once Upon A Time.

While tied to the first book in the Ravenspire series, The Wish Granter stands perfectly well on its own. It is told in a similar way–primarily dual POV in past-tense, with a smattering of the villain’s perspective threaded through. The resulting effect is consistent and cohesive. Some of the re-imagined elements (i.e. Hansel & Gretel: Monster Wranglers) posed intriguing worldbuilding questions that readers may look forward to being answered in future installments.

The Heroine:
Arianna Glavan never asked to be a princess. When the ruling mantle inexplicably falls to her and her twin brother Thad, she tries to make the best of their newfound responsibilities. But while the kingdom of Sundraille is their home, it doesn’t accept the illegitimate heirs with open arms. Their leadership turns out to be little more than a puppet dictatorship under the thumb of a drug-dealing Fae kingpin named Alistair Teague. Defying Teague means death, but submitting to him means the corrosive destruction of everything good in Sundraille.

Ari is an exceedingly pleasant departure from Redwine’s previous heroines. (As much as I enjoy a no-nonsense kick-butt warrior for a protagonist, it’s nice to see an author flex their range.) She is quick-witted, pithily sarcastic, deeply caring—immediately likeable. She also happens to be plus-sized, ethnically blended, and reeling from a lifetime of being the ignored bastard child of the king rather than a “true” royalty. Never mind the fact that she’d rather be baking up a storm than trying to run an ungrateful, disintegrating kingdom.

Thad: “But this is a boy, and you need to think of your reputation if you’re spending time alone with him—”

Ari: “Learning how to put a man’s eye out or take him down at the knees. Very romantic stuff, Thad. Very romantic. Oh, and we also hid a body together, so we’re practically engaged.”

All hail Princess Sassy-Pants! (I’m looking at you, Disney.)

The Hero:
Sebastian is a sympathetic hero, escaping a dismally awful background in hopes of a better life away from the drugs, abuse, and organized crime that were seemingly his birthright. His new job at the palace lands him directly in the path of the unorthodox—and doggedly determined–princess. Her insistence on treating him as an equal is enough to gradually chip away at his damaged past and sense of inferiority. While the eventual romance that develops between them is the kind that springs forth from a desperate thrown-together situation, it’s all the more believable for it.

My primary qualm with this story was in wishing there was something even mildly redemptive about Sebastian’s mother. I could accept his father being an abusive, 1-dimensional villain… but I was hoping for more depth out of the drug-seeking woman he felt motivated to fund a better life for. (Even just a memory or two of a time when she’d been more maternal, or a theory as to what hurts from her past drove her to this lifestyle, would have probably sufficed.) As it was, I struggled to understand how Sebastian could have turned out as an even vaguely honorable and/or functional human being—given there was no hint of any positive adult influence in his upbringing.

I also would have loved to see more of that living Fae house that came into play at the halfway point. It is said that a location can be a secondary character if portrayed well, but this reader had never before seen the concept taken so literally!

On the whole, this book is likely to prove an endearing and memorable experience for any medium-fantasy or fairytale enthusiast.

“Sometimes having courage means the hardest tasks fall onto your shoulders, and those leave the biggest scars.”

15 thoughts on “THE WISH GRANTER review and ARC giveaway!”